Last March Operation Rescue provided logistical support for prayer rallies in Pinellas Park, Florida, in an effort to save the life of Terri Schindler Schiavo, a disabled woman whose husband obtained a court order to remove food and hydration. During that time, our staff worked around the clock to intervene on behalf of Terri and stop her brutal death.
Among those thousands who joined us in front to Terri’s hospice, where she lay dying was Fr. Frank Pavone of Priests for Life. Fr. Pavone was with Terri and her family up until moments before her death, when Terri’s husband, Michael, asked for them to be removed from her bedside.
The pain and outrage of her needless death still haunts us today, a year later. Below is an open letter to Michael Schiavo from Fr. Pavone. We share his sentiments and pray for justice for Terri, if not in this life, then at least in the next.
-Operation Rescue Staff
An Open Letter to Michael Schiavo
NEW YORK, March 25 /Christian Newswire/ — Fr. Frank Pavone, National Director of Priests for Life, and an eyewitness to Terri Schiavo’s final hours, released the following open letter to Michael Schiavo tonight. Fr. Pavone will read it to a worldwide audience on an internationally broadcast religious service on Sunday morning, March 26.
Dear Michael,
A year ago this week, I stood by the bedside of the woman you married and promised to love in good times and bad, in sickness and health. She was enduring a very bad time, because she hadn’t been given food or drink in nearly two weeks. And you were the one insisting that she continue to be deprived of food and water, right up to her death. I watched her face for hours on end, right up to moments before her last breath. Her death was not peaceful, nor was it beautiful. If you saw her too, and noticed what her eyes were doing, you know that to describe her last agony as peaceful is a lie.
This week, tens of millions of Americans will remember those agonizing days last year, and will scratch their heads trying to figure out why you didn’t simply let Terri’s mom, dad, and siblings take care of her, as they were willing to do. They offered you, again and again, the option to simply let them care for Terri, without asking anything of you. But you refused and continued to insist that Terri’s feeding be stopped. She had no terminal illness. She was simply a disabled woman who needed extra care that you weren’t willing to give.
I speak to you today on behalf of the tens of millions of Americans who still wonder why. I speak to you today to express their anger, their dismay, their outraged astonishment at your behavior in the midst of this tragedy. Most people will wonder about these questions in silence, but as one of only a few people who were eyewitnesses to Terri’s dehydration, I have to speak.
I have spoken to you before, not in person, but through mass media. Before Terri’s feeding tube was removed for the last time, I appealed to you with respect, asking you not to continue on the road you were pursuing, urging you to reconsider your decisions, in the light of the damage you were doing. I invited you to talk. But you did not respond.
Then, after Terri died, I called her death a killing, and I called you a murderer because you knew — as we all did — that ceasing to feed Terri would kill her. We watched, but you had the power to save her. Her life was in your hands, but you threw it away, with the willing cooperation of attorneys and judges who were as heartless as you were. Some have demanded that I apologize to you for calling you a murderer. Not only will I not apologize, I will repeat it again. Your decision to have Terri dehydrated to death was a decision to kill her. It doesn’t matter if Judge Greer said it was legal. No judge, no court, no power on earth can legitimize what you did. It makes no difference if what you did was legal in the eyes of men; it was murder in the eyes of God and of millions of your fellow Americans and countless more around the world. You are the one who owes all of us an apology.
Your actions offend us. Not only have you killed Terri and deeply wounded her family, but you have disgraced our nation, betrayed the Gospel of Jesus Christ, and undermined the principles that hold us together as a civilized society. You have offended those who struggle on a daily basis to care for loved ones who are dying, and who sometimes have to make the very legitimate decision to discontinue futile treatment. You have offended them by trying to confuse Terri’s circumstances with theirs. Terri’s case was not one of judging treatment to be worthless — which is sometimes the case; rather, it was about judging a life to be worthless, which is never the case.
You have made your mark on history, but sadly, it is an ugly stain. In the name of millions around the world, I call on you today to embrace a life of repentance, and to ask forgiveness from the Lord, who holds the lives of each of us in His hands.
— Fr. Frank Pavone 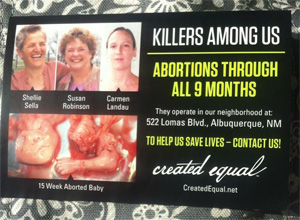