Abortionist that Fled U.S. to Evade Murder Charge May Have Been Found in India 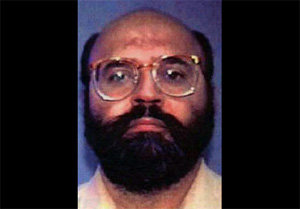 Operation Rescue is urging the extradition of abortionist Suresh Gandotra, who is charged with the grisly 1994 murder of Magdalena Ortega-Rodriguez during a third-trimester abortion. 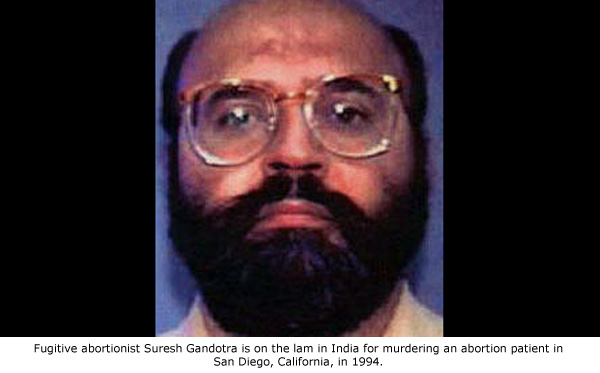 By Cheryl Sullenger
San Diego, CA — Suresh Gandotra is a fugitive from justice, but Troy Newman is hoping that will soon change.
Newman lived in San Diego on December 8, 1994, when Gandotra killed Magdalena Ortega-Rodriguez during a horrifically botched abortion at his seedy “mill” located in a shabby strip mall in San Ysidro, California, mere yards from the Mexican border.
It was bloody murder.
Ortega-Rodriguez was only 23 years old when she sought an abortion from Gandotra in what turned out to be a fatal mistake.
It is almost certain that she had no idea that Gandotra had a criminal background, or that he had no formal training in abortions. She had no way to know that his employees were unqualified, or that his “clinic” lacked adequate emergency equipment or plans for transport to a hospital in the event of an emergency.
In fact, Gandotra should not have been practicing at all.
At the time of Ortega-Rodriguez’ abortion, the California Medical Board had two open cases against the native of India. The first was related to 17 criminal charges against Gandotra involving grand theft, Medi-Cal fraud, and aiding his unqualified employees in the unlicensed practice of medicine. That case netted him a hefty fine and five months in prison followed by three months in a work-furlough program in Los Angeles County.
The second Medical Board case involved horribly botched abortion in May 1991, which would prove almost prophetic in its similarity to what would later happen to Ortega-Rodriguez.
Although he had been doing only abortions for the last 18 years of his career, Gandotra didn’t seem to be particularly good at them. Despite his lack of skill, once he got out of jail, he opened an ill-equipped store-front abortion clinic in border community of San Ysidro where he boasted of committing 100 abortions per week, mostly on women who were in the country illegally or had crossed into the U.S. from Mexico for abortions that were illegal in that country.
It was at his high-volume San Ysidro abortion mill that he saw Anal Lopez, a 22-year old Tijuana resident in her 18th week of pregnancy, who crossed the U.S.-Mexican border to obtain an abortion. Second trimester abortions such as the one attempted on Lopez usually involve a 2-3 day process, but Gandotra was not one to let medical protocol get in his way. He dangerously tried to get it done in one day, but the baby was larger and he had a hard time removing all the body parts. Realizing he could not complete the abortion, he sent Lopez home and told her to return the next day.
When Lopez returned, she was already suffering a raging infection, but nevertheless, Gandotra again tried to complete her abortion. He stopped when he realized that he had punched through her infected uterus and was pulling out parts of her bowel.
By the time Gandotra finally sent Lopez to the UCSD hospital in San Diegoseveral miles away, she had lost 40% of her blood.
“I guess I screwed up,” Gandotra would later tell investigators. 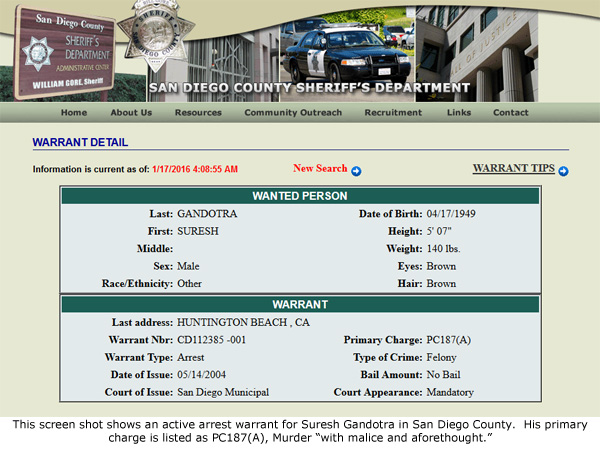 “The damage was so extensive it was difficult to identify the anatomy,” stated Dr. Donna Johnson, an obstetrician who treated Lopez and filed a declaration with the California Medical Board to support a complaint against Gandotra.
Luckily, emergency surgery at the hospital saved Lopez’ life.
When the Medical Board received the Lopez complaint, it should have acted promptly to suspend Gandotra’s medical license while it investigated further. However, the Medical Board engaged in a series of errors that resulted in the paperwork for both cases against Gandotra being delayed, then lost in limbo due to poor bureaucratic management, which the board has since attempted to correct.
Meanwhile, Gandotra continued to practice as if nothing was amiss.
It was only after the Ortega-Rodriguez death in 1994 – three and a half years after the Board should have acted to suspend Gandtora’s medical license in the Lopez case — that the Board again took notice of him.
Magdalena Ortega-Rodriguez’s abortion, scheduled for 10:00 a.m., went wrong quickly. Gandotra thought she was 22 weeks pregnant, but he was wrong. The young mother was actually more likely 28 weeks, just into her third trimester.
Gandotra halted the abortion when he again had trouble removing parts of her third-trimester baby. When he resumed the abortion later that afternoon he had only been working about ten minutes when he realized, like the Lopez case, he was again pulling out bowel.
Ortega-Rodriguez was in dire straits. Gandotra thought of transporting his dying patient to the UCSD hospital by car, but when he called for directions, hospital staff insisted that he call for an ambulance.
When paramedics arrived, they found Ortega-Rodriguez near death.
By the time Ortega-Rodriguez finally made it to a nearby Chula Vista hospital, she had suffered “massive” internal hemorrhaging, was in cardiac arrest, and showed no vital signs. Her pupils were fixed and dilated. While doctors were able to temporarily resuscitate her, she died in surgery from her disastrous abortion injuries, which included a badly lacerated uterus and other serious internal injuries.
An emergency room nurse told a San Diego Union reporter, “I’ve never seen anything like this before and I don’t want to again.”
Gandotra had literally butchered Magdalena Ortega-Rodriguez.
Like most abortionists who have caused patient deaths, Gandotra refused to accept responsibility for his homicidal incompetence. In his defense, his lawyer blamed the dead woman for her plight.
“There’s no question that (Gandotra) caused her death,” his attorney told the LA Times a year after Ortega-Rodriguez’ death. “He’s terribly upset about it (but) she signed a waiver that the risks include . . . a perforated uterus.”
What was not mentioned was the fact that Ortega-Rodriguez spoke no English, and since Gandotra spoke no Spanish – despite the fact that 95% of his patients were Spanish speaking — it is likely the consent forms were in a language that she did not understand.
“As despicable as it is for an abortionist to shift the blame for his incompetence onto his dead patient, it is something we see over and over,” Newman said. “What is worse is when medical boards fall for the blame-shifting.”
For example, late-term abortionist George Tiller often remarked that when abortion complications happen, it is the who bears responsibility for those outcomes because she made the decision to abort.
“Physicians are counselors, we’re advisors, we’re diagnosticians, we’re scientists, we collect information, we make diagnoses, we present options to you the patient, and you the patient make decisions. Physicians are not competent to decide for the patients because physicians are not responsible for the outcomes,” Tiller said in a 1996 video that marketed his Wichita abortion business to potential late-term abortion customers.
This philosophy essentially exempts abortionists from the consequences of their own negligence, at least in their own minds if not in the real world.
***
At another business in the same strip mall as Gandotra’s abortion shop, an employee noticed when the ambulance arrived that December afternoon in 1994. He notified one of the regular sidewalk counselors, a man who also happened to publish an independent newspaper. The sidewalk counselor notified the local mainstream media as well as other pro-life activists.
That is how Newman heard of Ortega-Rodriguez’s death. It was during a candlelight vigil for Gandotra’s dead patient and her child organized by this writer that Newman witnessed one of Gandotra’s employees leaving and locking the door on the clinic for the last time.
The California Medical Board noted ten “significant” areas where Gandotra deviated from the standard of patient care. He was forced to surrender his medical license. 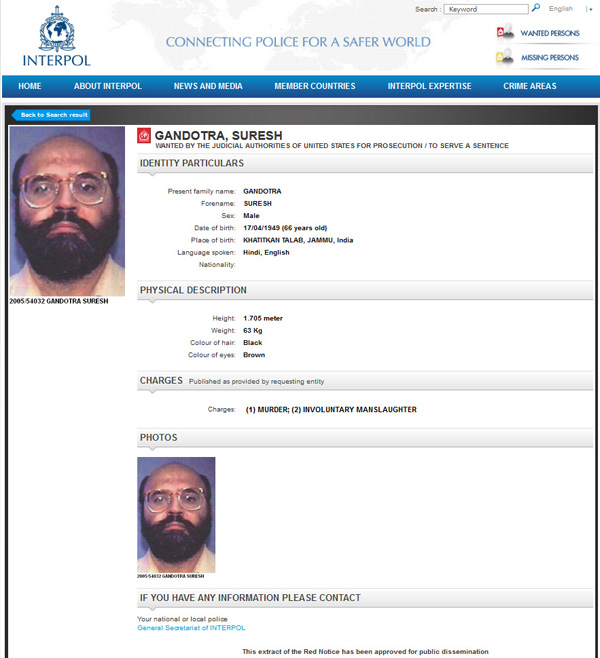 However, that was not the end of the story. So egregious were Ortega-Rodriguez’s injuries at the hands of a criminally negligent Gandotra that the San Diego District Attorney filed murder charges against him.
Newman phoned Gandotra and asked him how he felt about facing murder charges for killing Magdalena Ortega-Rodriguez, whose death left her 11-month daughter motherless. This was news to Gandotra, who hung up the phone then packed his belongings and fled the country for his native India.
For 22 years, his whereabouts were unknown while an arrest warrant on file with the San Diego County Sheriff’s Department remained active. Murder is one of the few charges for which there is no statute of limitations.
“In 1994, we did not have the technology we have now. At that time, we had no ability to research were he may have gone to in India,” said Newman. “I have often wondered about Gandotra over the years, but I didn’t think he would be easy to find. His is a murder fugitive, after all, and it seemed he would cover his tracks.”
Now, thanks to a tip from a pro-life blogger, it appears that Gandotra has finally been located. Christina Dunigan had been flipping through an issue of People Magazine when she noticed a spread that included a group of Interpol mugshots. There was a photo of Gandotra in living color. She notified Operation Rescue of her discovery.
Operation Rescue confirmed through the Interpol website that the mugshot photo was indeed the same Suresh Gandotra who was wanted for the 1994 murder of Magdalena Ortega-Rodriguez.
A quick Google search turned up Gandotra’s suspected whereabouts. It seems he opened an abortion clinic in the Trikuta Nagar community of Jammu, India, near the place of his own birth, where he continues to endanger women with his back-alley-style practices. He brazenly advertises his India abortion business on the Internet and in the Yellow Pages.
Fortunately, the United States signed an extradition treaty with India in 1997, with murder being one of the crimes that qualify for extradition. It should be possible to bring Gandotra back to San Diego where he can stand trial for his crimes.
“Murder is such a serious charge that everything should be done by the San Diego District Attorney’s office to bring Gandotra to justice,” said Newman. “So far, he has gotten away with murder, and it’s time to bring back to the U.S. to face the consequences of his criminal actions.”
Operation Rescue has notified the San Diego Sheriff’s Department of Gandotra’s suspected whereabouts, and hopes action will be taken to extradite him to San Diego to stand trial. The family of Magdalena Ortega-Rodriguez has waited far too long for justice.
—–
Sources: RealChoice Blogspot, LA Times, San Diego Union-Tribune, San Diego Sheriff’s Department, Interpol