Salt Lake City, Utah – Abortionist Nicola Irene Riley made a brief appearance in court this morning in Salt Lake City, Utah, where she waived an extradition hearing, clearing the way for her to be transported to Maryland to face murder charges.
Riley was indicted last month by a Maryland grand jury on one count of First-Degree Murder, one count of Second-Degree Murder, and one Count of Conspiracy to commit Murder for her participation in an illegal bi-state late-term abortion scheme with the notorious New Jersey abortionist Steven Chase Brigham. She continues to be held without bail.
Brigham was charged and has already been arraigned on five counts each of First and Second-Degree Murder and one count of conspiracy to commit murder. He was released on January 6, from the Cecil County Detention Facility after posting a $500,000 bail with a combination of personal assets and the use of a bail bondsman.
Riley and Brigham were caught when Riley perforated the uterus and bowel of a late-term abortion patient at a secret late-term abortion mill in Elkton, Maryland. Their suspicious behavior at the hospital emergency room, where they had transported the bleeding patient in a rental car, raised red flags with ER workers who reported them to the police. Their clinic was later raided by police, who discovered the bodies of 35 aborted babies in a freezer. The babies were as old as 36 weeks gestation, according to documents seized during the raid.
In September, 2010, Operation Rescue filed a complaint with the State Attorney in Elkton, Maryland, asking for criminal charges against Brigham, and launched grassroots efforts to bring him to justice.
Further investigations by Operation Rescue uncovered that Riley had lied about a previous criminal conviction and prison sentence in order to gain licensure in three states. She is currently banned from doing abortions in any state.
Riley is expected to be transported to Maryland within the next few days where she will be arraigned.
Read detailed background on Riley and Brigham’s murder case 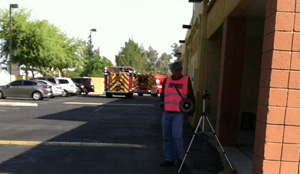