I am 23 years old and I would say, very careless about protection. I am the mother of three children although I’ve been pregnant more times than that. I would be a hypocrite to deny that I’ve been pro-choice. I thought the “abortion pill” was a more humane way to terminate and so I used that method. I remember going over paper work that told me that because the pregnancy was very early, there wouldn’t be a visible embryo and it would “seem” like a normal period. That information was then confirmed by the ultrasound technician as well as the counselor. The pregnancy was in the seventh week. After receiving the drink of methotrexate, I left for home with a prescription for pain medication and a packet of misoprostol tablets. Five days later as instructed, I inserted the tablets and waited. A few hours later severe cramping began as well as a gush of “pregnancy tissue” . While cleaning myself up, I noticed something silvery attached to the tissue. I looked closer only to realize that I was staring at my aborted child. I could see the protrusion on its chest where just six days ago, a heart had beat. The eyes were beginning to form already. No one told me that this might happen, in fact, I was guaranteed that it wouldn’t. I’ll never be the same again.
Sabrina
p.s. this is an actual photo, taken by me. 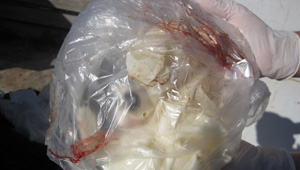 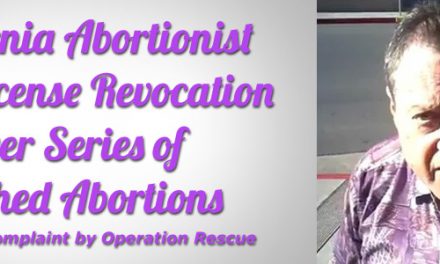