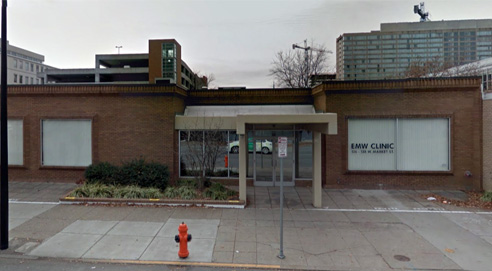 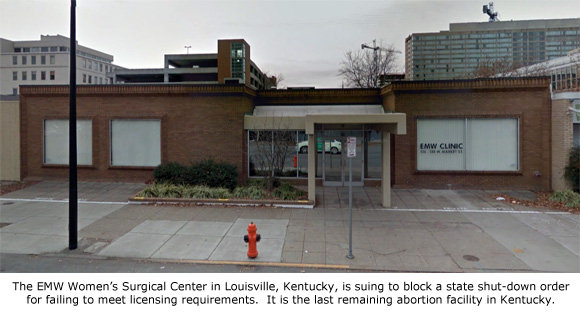 By Cheryl Sullenger
Louisville, KY – The State of Kentucky is engaged in an epic legal showdown with the state’s last remaining abortion facility, EMW Women’s Surgical Center, in an effort to shut it down – possibly as early as Monday, April 3, 2017 – for failing to meet licensing requirements.
Gov. Matthew G. Bevin and his administration issued a letter on March 13, 2017, to the EMW Women’s Surgical Center in Louisville, informing them that they were in non-compliance with licensing regulations for failure to have adequate transfer agreements with an ambulance company and a hospital.
Bevin successfully shut down EMW’s Lexington abortion office last June for conducting abortions without a license to do so – an order that was later upheld by the State Supreme Court. He also closed an illegally operating Planned Parenthood abortion facility in Louisville that had begun conducting abortions without a license.
ACLU Involvement
EMW Women’s Surgical Center is being represented by the ACLU of Kentucky in a lawsuit filed on March 29, 2017, which is seeking to block the state from closing the abortion business’ doors. The suit claims that the state order to shutter EMW Women’s Surgical Center for failure to comply with licensing requirements violates EMW’s rights and would cause “drastic” consequences.
Using scare tactics, the ACLU argued that women will self-abort, delay their abortions, or be “forced to carry to term against their will” should the state succeed in closing the last abortion facility in the state.
Abortions Safe?
The ACLU further maintains that the need for hospital and ambulance transfer agreements are unnecessary because abortions are safe. It states, “Complications from abortion in general are rare, and those that require hospitalization and that occur while a patient is at the abortion facility are exceedingly so.”
Yet, Operation Rescue has compiled evidence that completely refutes that argument, having documented nearly two dozen such transports from abortion facilities in just the first three months of 2017, which is only a fraction of what actually occur. Some facilities transport patients by ambulance as often as every two weeks.
“If you read the EMW complaint, you would think the sky will fall and the world will end if their abortion business is closed,” said Troy Newman, President of Operation Rescue. “Abortionists are not above the law and if they cannot meet facility licensing requirements, the state is correct in ordering them to shut down for the sake of public safety.”
Disqualified Hospital Transfer Agreement
One particular bone of contention is a 2014 hospital transfer agreement between EMW and the University of Louisville Department of Obstetrics, Gynecology and Women’s Health. The State has notified EMW that the hospital representative that signed the agreement had no authority to do so.
EMW then noted that they had recently obtained the additional signature on the hospital agreement of University Medical Center’s President and CEO Ken Marshall, but “shortly after” signing the agreement, Marshall apparently had a change of heart. He contacted EMW and asked that they not submit the agreement to the Cabinet.
This leaves EMW without a valid hospital transfer agreement and clearly in violation of licensing requirements.
First Abortion Free State?
“Gov. Bevins and his administration has had great success in closing abortion facilities that would not comply with the law. We are highly optimistic that Kentucky will prevail in closing the EMW abortion facility in Louisville, as well,” said Newman. “That would make Kentucky the first abortion-free state.”
Closing the state’s last abortion facility would be a precedent-setting accomplishment. An attempt by the Mississippi to shut down its only abortion facility was blocked by the Fifth Circuit Court of Appeals, citing the dubious legal theory that each state must have one open abortion facility, no matter how shoddy or dangerous it might be, in order for women of that state to exercise their “constitutional right” to abortion within the boundaries of the state.
“If Kentucky can close its last abortion facility, it will prove that it is possible to have an abortion-free state without bringing on the Apocalypse that abortionists predict. In fact, they may find that when an abortion business isn’t marketing abortions to women, they are actually better off. That can pave the way for other states to become abortion-free,” said Newman.
EMW Women’s Surgery Center and the ACLU are seeking a temporary restraining order to keep their abortion business open by barring the state from enforcing their licensing requirements.
_________
Learn how to build an abortion-free community. Buy the book Abortion Free, by Troy Newman and Cheryl Sullenger. (Available in paperback or for Kindle.)
____________
UPDATE, April 4, 2017: On Friday, U.S. District Judge Greg Stivers issued a temporary restraining order without a hearing, surprising both an attorney for the EMW abortion facility and a spokesperson the Cabinet for Health and Family Services. The following is an excerpt from a story published 3/31/2017 by Courier-Journal.com:

The order came as a surprise to [EMW lawyer Donald L.] Cox and to the cabinet since the parties had not yet had a hearing to discuss the case with the judge. [Judge] Stivers said in his order that prior notice is not necessary in a case where facts “clearly show” that harm, irreparable injury or damage will occur before a hearing can be held.
Doug Hogan, a spokesman for the Cabinet for Health and Family Services, which licenses and inspects abortion clinics, said officials were “surprised and disappointed the court entered a temporary restraining order without input from the cabinet and without first ascertaining the status of communications between both parties.”

The temporary injunction is good for two weeks.