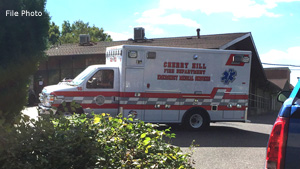 Cherry Hill, NJ – An ambulance was called to the Cherry Hill Women’s Center (CHWC) in New Jersey on September 21, 2019, for a 22-year old abortion patient who was hemorrhaging after an abortion.

According to 911 records obtained by Operation Rescue, the woman underwent an elective abortion of her baby at 24 weeks gestation, which is the end of the sixth month of pregnancy.

Such late abortions are usually 2-day procedures that are completed on the second day by dismembering the baby for removal from the womb. They carry much higher risks to the women undergoing them.

When the 911 dispatcher asked if there was a room number that EMS should go to, the CHWC employee that placed the call responded, “Uh, no, just the back of the parking lot. That’s where we usually meet EMS, so we’ll have the door open for them.” [Emphasis added.]

The CHWC is a high-volume abortion facility, and is the only one in New Jersey licensed as an ambulatory surgical center.  This licensing allows it to conduct abortions beyond 14 weeks, which is the gestational limit on unlicensed abortion facilities in that state.

While the CHWC’s website indicates they conduct elective abortions up to 25 weeks, it also has a program for “fetal anomalies,” which can include abortions throughout all nine months of pregnancy, since New Jersey has no gestational limits on abortion at licensed facilities.

To sugar-coat the barbaric practice of killing of innocent babies days or weeks before birth, CHWC offers “spiritual” support, baby keepsakes such as hand and foot prints, and cremation or burial for the dead infant.

“An abortion for any reason is a tragic loss of human life. Abortions when a baby is able to survive outside the womb are particularly troubling to most Americans,” said Newman. “It’s shocking and sad that New Jersey does not care enough about women and their babies to protect them from this heinous business whose only product is a dead baby.”

Read CAD Printout from this emergency.