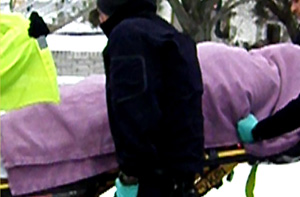 By Cheryl Sullenger
Cleveland, OH – When he saw the ambulance pull up to the Pre-term abortion facility in Cleveland, Ohio, Frank Kosmerl pulled off his gloves despite the sub-freezing temperatures and hit the record button on his camcorder.
It was the frigid morning of February 13, 2016, when Kosmerl, a long-time pro-life activist, captured alarming images showing EMS responders slowly wheeling out a patient covered tightly over the head with a doubled-over pink blanket.
He described the slow, somber march to the ambulance as reminiscent of pallbearers at a funeral procession. The female form below the blankets never moved. Why was there no sense of urgency?
Kosmerl told Operation Rescue that after the patient was loaded into the ambulance, it remained parked in front of Preterm for another ten minutes before driving off without lights or sirens.
These observations led him to question whether the patient survived her late-term abortion at a clinic where ten previous medical emergencies – including one patient death – have been documented. 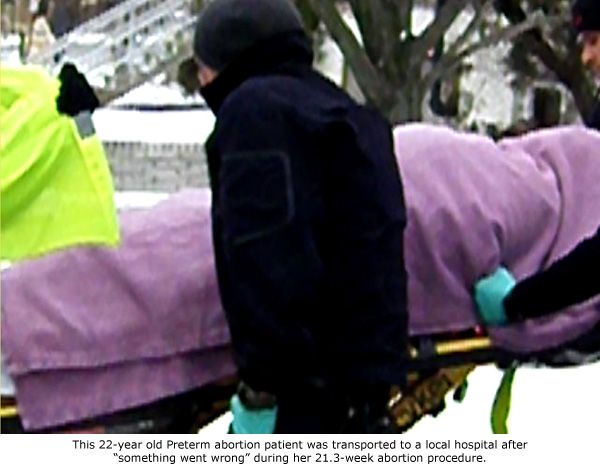 That question has yet to be answered.
A new 911 audio recording just obtained by Operation Rescue has revealed that the woman on the gurney was a 22-year old patient who suffered a life-threatening medical emergency during late-term abortion Preterm, the same abortion center that inflicted a fatal abortion on another 22-year old woman, Lakisha Wilson, nearly two years ago.
This young woman was 21.3 weeks pregnant, according to the Preterm worker that dialed 911. Such late-term abortions are inherently risky, yet Preterm is inadequately equipped to handle complications that seem to arise there on a regular basis.
Curiously, while the Preterm employee who called 911 knew details of the patient’s care, she did not know — or would not say — exactly what “went wrong” during the late-term abortion.

Dispatcher: Tell me exactly what happened.
Preterm: We’re an abortion facility. She was in the middle of an abortion. She’s 21.3 weeks. And something went wrong during the procedure.

Dispatcher: What went wrong? Does she like have — Is she awake still?
Preterm: I don’t know, ma’am. I’m not in the room. So I’m assuming bleeding. Maybe a perforation? I don’t know.

The patient was brought out a back door of the facility that leads to the rear stairwell. There is no access to the elevator from that door. (See Floor Plan.) During all other medical emergencies, EMS have used the front entrance of the building, which is just steps from where the ambulance usually parks.
In the video, emergency workers are seen struggling to push the gurney from the rear of the icy, snow-packed parking lot.
Kosmerl wonders if the elevator, which is the only gurney access to the third-floor procedure rooms, was malfunctioning again.
“There are so many questions about this emergency. Why did the EMS take the patient the long way to the ambulance? Was EMS forced to carry the injured woman down two flights of stairs? Or were they just trying to prevent other patients from seeing the corpse-like figure under the blanket?” asked Troy Newman, President of Operation Rescue. 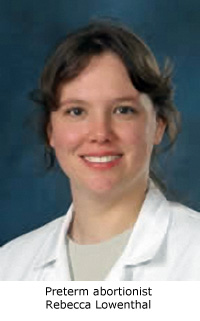 Preterm’s notoriously malfunctioning elevator was not working properly during Lakisha Wilson’s fatal abortion emergency in 2014 or for a hemorrhaging 300-pound woman that had to be hand-carried down two flights of stairs by EMS personnel in 2012. Pro-life activists regularly report seeing the elevator repair truck parked in Preterm’s lot.
The abortionist on duty that day, according to witnesses, was likely Rebecca Lowenthal. A woman believed to be Lowenthal is seen in the video with a blue wrap around her head and shoulders. She climbed into the ambulance and rode with it to the University Hospital Case Medical Center where Preterm enjoys an affiliation.
“Eleven medical emergencies in the past five years is simply unacceptable. Women walk in but they don’t walk out,” said Newman. “The public has a right to be protected from such shoddy and incompetent practices. For years, Ohio Department of Health inspectors have taken note of one abortion-related injury after another but have continually neglected to hold Preterm accountable, even in light of the avoidable death of Lakisha Wilson. It’s time to shut down this house of horrors before anyone else ends up on a slab in the morgue.”
Note: Operation Rescue is working through the legal and regulatory system with Cleveland Right to Life, Right to Life of North East Ohio, Lake County Right to Life, Created Equal, and others to protect women and their babies from further harm at Preterm. 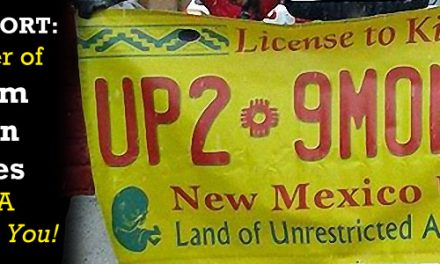